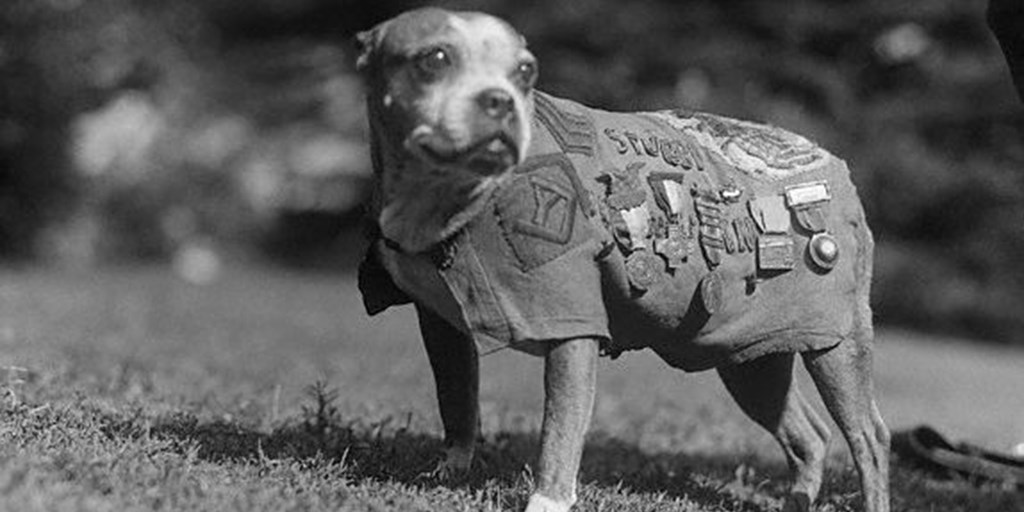 Military heroes come in all shapes and sizes. Dogs have worked as message carriers, guards, and bomb sniffers since World War I, serving their countries and saving numerous lives in the process.

Bill Kelly, founder of Bil-Jac, developed his passion for canine nutrition during his time in the Army, in World War II, along with his previous knowledge in animal nutrition. He helped improve the health of the German Shepherds on the base, as they were being trained to sniff out bombs, by providing high-quality food and improving the overall conditions of the kennel. Below we honor the countless dogs have made massive sacrifices, and it’s important that we celebrate their important work. Here are four famous military dogs that every person should know.

Sergeant Stubby - The Most Decorated War Dog of WWI

While there have been many dogs to serve their countries, Sergeant Stubby holds the distinction of being the only dog nominated for rank and then promoted to sergeant through combat.

Stubby started as a normal civilian canine living near Yale University in 1917. While members of the 102nd Infantry trained on university grounds, Corporal James Robert Conroy became particularly fond of the Boston Terrier mix. When the unit shipped out for France, Conroy hid Stubby under his overcoat. Conroy's commanding officer eventually discovered Stubby. Fortunately, Stubby saluted the commanding officer upon detection and was allowed to stay as the official mascot of the 102nd Infantry Regiment.

In total, Stubby participated in four offensives and 17 battles on the Western Front over the course of 18 months. Stubby overcame multiple injuries to help protect his allies from enemies, locate missing soldiers, and alert fellow troops to duck for cover when he heard the whine of incoming artillery shells. Stubby also wore a specially designed gas mask to protect him from mustard gas. Some soldiers even claimed that Stubby captured a German soldier by refusing to let go of his pants until fellow soldiers found him.

Understandably, Stubby was a celebrity after the war. The charismatic canine met multiple presidents and led several parades across the country. He was also presented with a gold medal from the Humane Education Society and even became the team mascot for the Georgetown Hoyas football team.

Military dogs don’t need to be big and strong to be heroes. When an American soldier found Smoky in an abandoned foxhole in the New Guinea jungle, she was already a fully-grown Yorkshire Terrier – and weighed all of four pounds.

Smoky then traveled in Corporal William A. Wynne’s backpack for the next two years of WWII. During that time, the duo served in the South Pacific with the 5th Air Force and flew a dozen air/sea rescue and photo reconnaissance missions. In her military service, Smoky managed to survive 150 air raids on New Guinea and endured a typhoon at Okinawa.

One of Smoky’s greatest accomplishments was made possible by her diminutive size. When military engineers needed to build a critical airbase for Allied warplanes, the team needed to run telegraph wire through a 70-foot-long pipe that was only 8 inches in diameter. Soil had filled most of the pipe, which meant the engineers would be exposed to a three-day dig exposed to bombings – except that Smoky was able to fit in the partially filled pipe and finish the task in minutes.

Smoky also holds the honor of being the first recorded therapy dog. Smoky’s healing efforts first began at 233rd Station Hospital in New Guinea when she would visit injured soldiers coming from the Biak Island invasion. Her work as a therapy dog continued for more than a decade, long after she and Wynne left New Guinea for Wynne’s hometown of Cleveland.

Gander – The “Black Beast” of the Canadian Army

While the U.S. has been fortunate to have multiple heroic canines serve in the military, Gander became famous for helping out our neighbors to the north. Gander was a sizable Newfoundland, with some reports estimating him to weigh around 130 pounds. Gander was initially known as Pal, but was renamed after his family gave him to The Royal Rifles of Canada, a regiment of the Canadian Army.

Gander shortly became the regimental mascot for the 1st Battalion of the Royal Rifles. The giant black canine and his battalion were sent to Hong Kong in 1941 to defend against invading Japanese troops. Despite the intense heat, Gander fought off enemies three separate times during The Battle of Hong Kong. Enemy troops reportedly called him the “Black Beast,” as Gander’s dark fur made him extremely difficult to see during battles at night.

Tragically, Gander died during the Battle of Lye Mun after repeatedly fighting off Japanese troops. Shortly after midnight, an enemy grenade landed near a group of injured Canadians. Gander heroically picked up the grenade with his mouth and ran off with it, saving the lives of seven soldiers at the expense of his own.

After the war, survivors of The Battle of Lye Mun insisted that Gander’s name be included on the Hong Kong Veterans Memorial Wall in Ottawa, Ontario, Canada. Gander was also posthumously given the Dickin Medal in 2000, an award for animals who show “conspicuous gallantry or devotion to duty while serving or associated with any branch of the Armed Forces or Civil Defence Units."

Lucca – A Veteran of More Than 400 Bomb Detection Missions

While some military dogs wind up in combat, others are trained as specialized search dogs. Of these many heroic canines, Lucca is one of the most notable bomb detection dogs in recent history.

Lucca, a German Shepherd-Belgian Malinois mix, was deployed twice to Iraq and once to Afghanistan. She served on more than 400 missions during her tenure, finding ammunition, explosives, and insurgents at least 40 times during her six-year career. More notably, there wasn’t a single human fatality under her watch despite the dangerous conditions.

Lucca went out on her final mission in 2012, when she uncovered a 30-pound explosive device. While continuing her search, another device detonated underneath her. Lucca’s handler ran to her rescue despite known active explosives in the area. Lucca lost her front left leg but was able to recover from her injury and walk again in 10 days. After her sacrifice, Lucca retired and moved back home with Gunnery Sgt. Chris Willingham. Like Gander, Lucca was awarded the Dickin Medal, earning hers in 2016.

Helping Out Our Heroes

For more than a century, dogs have provided loyal, unselfish service for people all over the world. While some dogs supported people on the battlefield, others play a key role as service dogs for veterans and first responders with disabilities.

Want to learn more about our favorite furry friends or what you can do to support your dog? Join our Best Friends Club today to receive our exclusive email newsletter full of articles on training tips, healthy habits, and members-only discounts on Bil-Jac dog food, treats, and other products.