You don’t need to be human to be a hero. Every day, service dogs around the world work to provide physical and emotional assistance to people with disabilities. For one yellow Labrador Retriever named Sully, that work involved assisting former President George H.W. Bush and earning the 2019 ASPCA Public Service Award.

Sully’s story begins during his time with America’s VetDogs, a not-for-profit organization that trains and places service dogs for veterans and first responders with disabilities. While the process of raising and training service dogs is a costly endeavor, America’s VetDogs never charges individuals for these special dogs.

Sully, named after famous airplane pilot Chesley “Sully” Sullenberger III, was raised and trained through America’s VetDogs’ prison puppy program. This program allows carefully selected inmates to give back to society by training dogs with basic tasks that can help improve the life of a veteran with disabilities. After months of training in the program, Sully returned to the America’s VetDogs Smithtown, New York, campus to receive advanced training so that he could care for his veteran’s specific needs. This personalized training takes place for every one of these service dogs, but Sully’s veteran just so happened to be a bit more well-known than the average person. 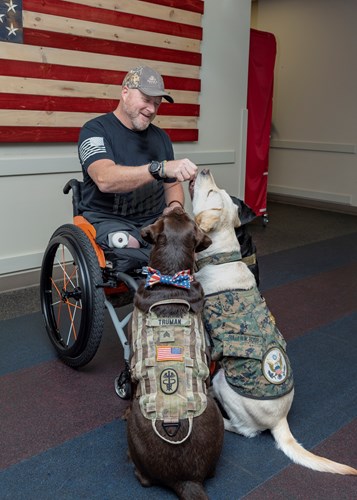 Sully was matched with President Bush in the summer of 2018 to provide both support and companionship while helping him with his daily activities. Sully admirably assisted the former president during the last six months of his life until Bush passed away November 30, 2018.

Even then, Sully loyally stayed by Bush’s side, dutifully lying by his casket during the president’s funeral in December. The image of Sully’s continued devotion to Bush quickly became an iconic image and showing the strong bond that can form between service dogs and their human companions.

While his service had ended with the Bush family, Sully’s work wasn’t done quite yet. In February 2019, the canine joined to ranks of the staff at the Walter Reed National Military Medical Center in Bethesda, Maryland. Sully was given the rank of hospital corpsman second class on his arrival as part of the center’s WRB Facility Dog Program. This new role allows Sully to help reduce stress and improve general well-being for the patients and their families, and staff at the medical center. As a result of his dedication to Bush and the veterans at Walter Reed Bethesda, the ASPCA named Sully the recipient of its 2019 Public Service Award.

A Spotlight for Service Dogs

Sully’s service has placed a spotlight on the importance of service dogs for veterans and other people in need of skills and tasks a service dog provides. Not only has Sully done tremendous work helping the Bush family and numerous patients at Walter Reed Bethesda, he’s also brought attention to the important work that he and countless other service dogs provide to people across the country.

Bil-Jac is proud to support America’s VetDogs and its programs through purchases of our America’s VetDogs Treats. Thanks to donations from generous individuals, families, and organizations, America’s VetDogs can continue to train and place service dogs like Sully who can change the lives of veterans with disabilities. Service dogs can help people heal, and we salute Sully and every other four-legged friend who helps make our country a better place.