Rituals and Relationships: An Interview with Celebrity Animal Trainer and Author Joel Silverman

After nearly five decades of experience as professional animal trainer and TV show host, Joel Silverman has seen just about everything you can imagine when it comes to canine behavior. That vast experience has helped him become one of the preeminent celebrity animal trainers in the country, and he hasn’t slowed down in recent years.

Between teaching dog trainer certification courses, contributing to the Bil-Jac blog, and helping pet parents across the nation, Joel found time to finish his fifth book. Rituals, currently available on his website and Amazon, explores your dog’s behavioral patterns and whether you should try to eliminate or encourage those natural behaviors. We talked to Joel about his new book, how relationships impact training, and why people should tailor their methods to their dog’s personality.

Bil-Jac: What was the inspiration to write Rituals?

Joel: It basically goes back to my book More What Color is Your Dog? and a chapter about uncontrolled training environments. It’s really important for people to understand that there are two types of environments to train dogs: controlled and uncontrolled environments.

Rituals are habits that dogs do over and over again. In the book, we talk about how rituals manifest. These actions are caused by some type of trigger – for example, a dog may jump on someone if they come in through the front door. Playing out the ritual makes that dog feel good. Once we understand what a ritual is, we can understand how important it is for people not to let these rituals develop.

Bil-Jac: What does it take to train a dog not to complete a ritual?

Joel: Rituals are much more difficult behaviors to eliminate. As they happen over and over, your dog reinforces that behavior – the more he does it, the more excited he gets. A good example is if a dog has started jumping up on people when they come into the front door. If somebody calls me to see if I could try and train their dog not to do that, the answer is absolutely. If someone calls me about a dog who has been jumping up on people at the front door for seven years, you can still train him, but it will be much more difficult because jumping has become a ritual.

The way we get rid of rituals is to interrupt behaviors and not allow them to happen. That’s why I wrote this book. I really wanted it to be something where people could understand about rituals and habits. The cool thing about rituals is that there are some good rituals that you can use to train your dog. They can be something you build on or try and eliminate. For example, people who train dogs for the detection of narcotics, bombs, or drugs use rituals as reinforcement. This is also true for flyball dogs or agility training. Depending on the dog and the reward you’re using, you can really build on the payoff the dog gets for completing a ritual. It can work for you as well. 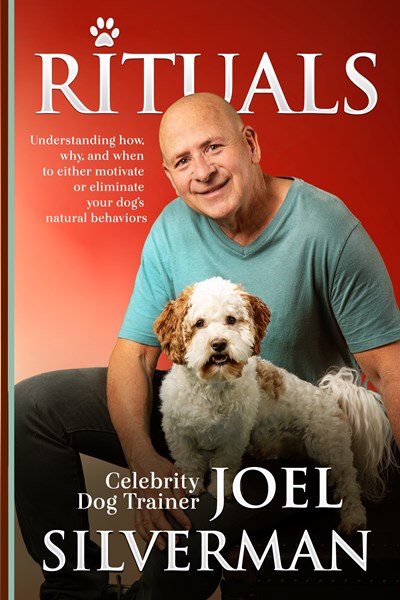 Joel: In the book, we discuss that there are certain things people do as well. The reason I learned this is because I’ve been doing my dog trainer certification courses now for three years. I have helped certify around 300 people and I’ve seen some of the habits people have. These habits can become rituals that are triggers to certain rituals for dogs. In a sense, you’ll do something that you don’t realize you’re doing and that will get the dog all excited and create a problem – it’s almost like a double ritual.

Let’s use the front door as an example again. If somebody walks in and is pretty mellow, it’s a little easier to prevent a potential ritual. If someone walks in and gets extremely excited about a cute dog, that excitable reaction can build up the dog’s ritual of jumping. The dog is already in the mode to consider jumping, and an excited tone and body language can elevate that ritual even further. There are things people can do with their actions that can either increase rituals, and they may even want it to happen, or there are things we can do to get rid of the ritual.

Bil-Jac: In the past, you’ve mentioned that dog training is centered on a combination of you and your dog’s personalities. How important is that for the process of addressing rituals?

Joel: In the introduction of Rituals, I wrote about something that I talked about in my very first dog training video, The Hollywood Dog Training Program. In that video, the very first thing I said was “the thing that makes dog training so special is that it’s a combination between your dog and you, and that makes that relationship different than any other relationship.”

It’s about understanding the dog you’re dealing with. Even if you’re a high-strung person, you may have a mellow dog, a shy dog, or a dog who is also high strung. How you train those dogs and the chemistry between you two will be totally different between a dog with a really high prey drive and one who is laid back. You may do certain things the same way, but how you walk, talk, move, and conduct other things you do are going to vary. It’s important to take it upon yourself to look at your dog and determine what you need to do.

Bil-Jac: As you’ve mentioned, you’ve been in the dog training business for a long time. Has anything in the business changed since when you started?

Joel: Dog training has really changed a lot. There basically used to be one style of dog training. There are different trainers who have gone out and call themselves “purely positive” or “positive only,” training terms like that. You really don’t want to lock yourself into a box and say “this is what I do” because that style of training may be good with certain dogs, but it’s not going to be good with every dog. There are some people who may use more control and fewer treats, and there are certain dogs like German Shepherds and Rottweilers who are fine with that type of training. Again, that style of training may work with them, but it’s not going to work with every dog. As long as the dog is happy and learning, that’s what matters.

Most trainers can pick and choose what they do with each dog. In a perfect situation, I’m going to use Bil-Jac dog treats to train behaviors, but I also have to understand that sometimes dogs don’t like treats. They may be high prey drive and don’t care about the treat and care more about the toy as the reward – that’s the payoff. You need to have a lot of tools in your toolbox.

Bil-Jac: Do you have a favorite aspect of Rituals?

Joel: I think one of the cool things about this book is that people who will read it are private dog parents, professional dog trainers, and people like agility trainers who want to build up that drive in their dogs. My favorite chapter in the book is chapter four, called “The Game.” The game is understanding that if you bring your dog out to a training session and your dog’s is wagging his tail and all excited, that’s great. How do you instill that attitude? If you’re using treats every single time you bring him out, he’ll think “this is great” whenever he goes out there. The same goes with a toy – he’ll know it’s time to play and get excited.

That’s why it’s so important for everyone to understand that training has got to be perceived as a game. You can’t really train your dog if he goes out to a training session and he’s just not into it. You want to give the dog the opportunity to have the best training sessions possible rather than just bringing him out because it’s good for him. That’s the idea of the game.

You also have to understand that what the dog perceives as a game is going to be different for every dog. Some dogs just want a relationship. They may think “treats are great, toys are great, but I just want to work with you because I love you and want to please you.” That’s awesome. Others may need some incentive, so you need to figure out which is the best approach for him.

Bil-Jac: Is there a different approach to teaching people about training in a book versus in person?

Joel: In most situations, it’s better to teach in person because you can work with the dog. This is different because there are so many aspects of understanding rituals that it’s best to cover those ideas in a book. The good thing about having a book is that there is a lot of information – there are just so many variables with rituals that you really need to put it in a book. I’m also recording an audio version as well.

Bil-Jac: In addition to promoting Rituals and recording the audiobook, do you have any other projects you’re working on or planning to pursue?

Joel: I’m going to start doing some events with a couple of other trainers. We’ll go on the road and do these seminar/workshops where half the people can bring their dogs and the other half can watch. We’ll actually work with the dogs right there in front of everyone, so that’s pretty cool. I’ll be in Tucson in December with Larry Krohn, who is a really well-known trainer. I have some advanced certification courses in Kansas in September. I also have basic certification courses in Cocoa, Florida in August and Portland, Oregon in October. Next year, we’ll also be doing some workshops in St. Louis around February and March 2021.

Want more lifestyle articles and other helpful posts about our favorite furry friends? Join our Best Friends Club today to receive our exclusive email newsletter full of educational content and members-only discounts on Bil-Jac Dog Food, Treats, and other products.