Socializing Kids and Dogs: How to Prepare Children for Canine Interactions

It’s extremely easy for kids to get overly excited about a new furry friend – and it’s hard to blame them. The sight of an adorable dog can cause anyone to squeal with glee and want to hug these captivating critters tight.

Of course, that same urge can pose problems if certain boundaries aren’t set. Kids will naturally want to play with the dog, but they don’t always understand the best way to interact with their furry friends. Let’s break down what you can do to build a healthy relationship between your human and fur kids.

How to Introduce Dogs to Kids and Build Healthy Relationships

While youthful exuberance is understandable for a kid, that same enthusiasm can lead to negative interactions between your child and your dog. The first few meetings between the two can set the tone for the rest of that relationship.

The tricky part about the first few initial interactions between kids and dogs is that children don’t always understand what they should or shouldn’t do. Instead, they’ll typically act on impulses that may lead to bad behaviors in the future. That’s why it’s important to make sure both parties start off on the right paw and develop a healthy relationship. According to Professional Animal Trainer and TV show Host Joel Silverman, there are two key aspects to this process.

Educating kids about how to interact with dogs

The first step toward introducing a child to dogs starts before the two ever meet. According to Silverman, you should communicate with your kids about what they should do when they’re with dogs.

“The first big thing you should do is educate children about dogs,” Silverman says. “A lot of kids have never been around a dog before. The first week of this process should just be educating the children and letting them get comfortable around the dog.”

As you may expect, there are a few different topics that you’ll need to discuss with your kids. Silverman suggests talking to your kids about the following topics before letting them interact too closely with your new dog.

Give the dogs some space

When kids see a dog, it’s not uncommon that they’ll want to play with the dog. That urge is perfectly understandable, but that may not be what the dog wants. That potential hesitation on the dog’s end is why Silverman suggests that you tell your kids to give the dogs their space until they’re ready.

The best way to avoid this situation is to teach kids to lets dogs come to them first until they become more acquainted with their new human friends. In turn, the dog can decide if he wants to be social or not. If the dog comes to your kid when he’s ready, there will be more trust down the road.

Prepare them for your dog’s personality

Every dog is different, but children won’t necessarily recognize that. Certain dogs will react better to an excitable kid than others, so you’ll want to prepare your child for your dog’s particular personality. Silverman breaks down the different types of personalities into different colors.

As you may expect, certain approaches will be better for some types of personalities than others. For example, children will need to be more empathetic and move slower around green and blue dogs. These types of dogs will generally be more comfortable if your kid calmly sits on the ground and doesn’t rush them. Red and orange dogs have the opposite problem – you don’t want your kid to make them more high strung. Tailoring your kid's approach to the dog’s temperament will make a notable difference in the future.

“It’s all about the relationship,” Silverman explains. “It’s so important to make sure children understand these personalities and that there are certain ways they need to act around the dog.”

Be gentle when touching dogs

Sometimes kids don’t know their own strength. You’ll want to let kids know that while they may want to hug and squeeze their new friend, they need to be gentle and not hurt the dog. A good place to start is to teach kids how to pet dogs, although each dog can have different preferences.

“Certain dogs like being pet in different spots,” Silverman says. “Some dogs that are with higher prey drives will get overly excited if you pet them around their face, but are more relaxed when you pet them by their chest or below their neck. You’ll want to be soft and mellow when you pet them to keep them at ease and comfortable.”

It’s also important to tell children to stay away from sensitive areas like the ears and nose. A lot of kids will instinctively want to grab and play with a dog’s ears, nose, and tail. However, the dog won’t find those grabs, pokes, and prods nearly as fun and will learn to stay away from children as a result.

“I tell people to put their children in the position of the dog,” Silverman suggests. “Ask them if they would want people to tease them or pull their ears. If they understand that the dog doesn’t like it either, they’ll know to be gentle with the dog.”

Be calm and gentle with hands near a dog’s face

Another notable lesson involves teaching children to not overreact when dogs open their mouths. The typical example for this is when kids pull their hand away and scream when a dog goes to sniff or lick a hand near their face.

The main issue with this type of reaction is that it can teach the dog bad behaviors. If the child pulls his hand away and screams, the dog may perceive that interaction as a game and do it again. Although it starts off as play, these repeated behaviors can turn into a form of aggression over time.

“Teach your child to just calmly hold his hand there and not scream or pull it away,” Silverman says. “If the dog opens his mouth, just give him something else to chew on. You can also say the word ‘no’ to teach him not to open his mouth. This will help reinforce healthy behaviors instead of teaching dogs to react to screaming or hand pulling from the start.”

Be careful with your dog’s toys

Kids will naturally want to play, but it’s no longer a game when someone gets hurt. For example, kids need to be careful when playing tug of war or other games where their hands will be by a dog’s mouth. Dogs grab these toys with their teeth, so a lively game can result in an unfortunate accident – especially if you have a red or orange dog that may react to quick movements.

“If the dog wants to move its mouth around a lot on a soft toy or something like that, a lot of times they might nail the child’s hand,” Silverman explains. “We might be able to see that coming, but kids might not. You may want to wait until your dog or child is older until they play tug of war or some type of game like that.”

Another lesson is to avoid playing tricks on the dog. A classic example of this is when a kid pretends to throw a ball just to fake the dog out and confuse him. While a kid may find that funny, it’s ultimately unfair to your best buddy. Playtime should be a positive experience for both parties, so it’s good to snuff out these types of behaviors to make sure that both your child and your furry friend have a good time.

As with toys, it’s important to teach kids to give the dogs some space when it comes to mealtime. Kids shouldn’t try to play around with that food or distract your canine companion.

While children should know to give dogs space during mealtime, that doesn’t mean that they can’t be involved in the feeding process. In fact, Silverman encourages having children feed your four-legged friend to help build the bond between kids and dogs. It’s just best to make sure that children know to move away from the food bowl once the job is done to allow the dog to eat in peace.

Building bonds between kids and dogs

After you’ve spent enough time educating kids about what they should or shouldn’t do around dogs, it’s time to make a few introductions. This part of the process is essential, as it will help both kids and dogs grow their relationship.

Start off with the dog on a leash

When you’re introducing your child to a dog for the first time, it’s a good idea to keep the dog on a leash. This leash will allow you to have some control over the dog so that he stays where you want him to and makes it less likely that kids will feel the need to chase after the dog if he leaves the room. That same control can help prevent any problems in case the dog gets mouthy or is provoked to react.

While the dog is still on the leash, you can have kids stand and walk alongside the dog. Silverman suggests having the child stand alongside the dog and hold a Bil-Jac treat near their opposite shoulder. From there, the kid can walk a few steps, stop, and give the dog a treat. This process is a great way to start training the heel behavior and build that bond.

Use treats to start building that relationship

Speaking of treats, these rewards will help grow the relationship. The key part of this process is to have a kid hold a treat in the palm of his hand. Dogs are more likely to nip at treats if you hold them between your fingers, whereas they’ll likely lick the treat out of an open palm.

As we mentioned before, it’s important that the child doesn’t pull the treat away in a panic or to tease the dog. Pulling that hand away can cause the dog to snap at the treat and reinforce bad behaviors. By having the dog gently take the treat, he’ll remember that the child rewarded him and will trust him more in the future.

Training is a great way to build bonds between dogs and their family. Once you start training your dog basic behaviors – sitting, heeling, etc. – you should consider getting your child engaged in the process.

“When the dog is trained, you can show the child what you did and how you did it so that they can become involved,” Silverman suggests. “They won’t necessarily be involved in the training, but it’s a good learning opportunity that helps kids and dogs work together.”

Of course, some children may be too small to help with training. Silverman suggests that kids under the age of 6 likely won’t be able to help, but kids that are older can take the opportunity to learn responsibility and bond with your dog.

Building Bonds for Your Whole Family

With a little preparation, kids and dogs can develop a special bond that would warm anyone’s heart. Want to learn more about how you can continue building bonds between your four-legged friend and the rest of the family? Sign up for the Best Friends Club to receive our exclusive monthly email newsletter with special training tips, dog care advice, and special members-only discounts on Bil-Jac Dog Food, Treats, and other products. 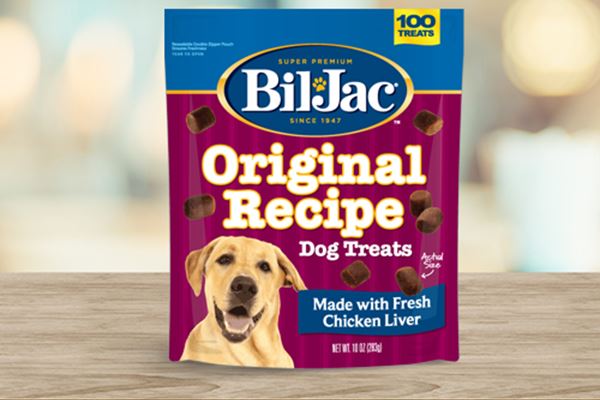 Small size is perfect for treating any time.

A grain free treat alternative that lets your dog Rise Above the Grain®.