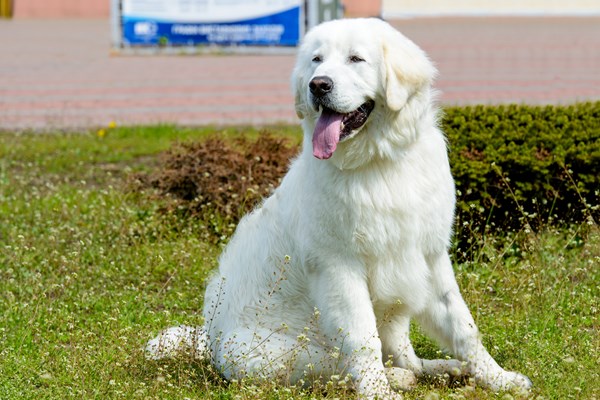 The Kuvasz requires vigorous daily exercise, such as jogging or long walks. Like most giant breeds, the Kuvasz is prone to bone and joint problems, so be careful you do not over-exercise, particularly with young, growing dogs. Do not jog or run with a Kuvasz until it is a minimum of one year old.

The Kuvasz has a long, thick coat that requires weekly brushing. Avoid bathing.

Intelligent, bold and independent, this breed is not for everyone. The Kuvasz has a mind of its own and while it can be "taught" certain things, it is not the most trainable breed. Although the social level varies from dog to dog, the Kuvasz is generally fond of its own family and wary of strangers. The breed does well with other pets and children only if raised with them from puppyhood. Otherwise it will be combative, particularly if a new pet or child is introduced to an adult Kuvasz. Dogs that will be used for herding and guarding also should be introduced to their livestock at an early age (6 - 8 weeks) so they can form a bond with the animals they'll be protecting. It's best that an experienced adult dog show the young Kuvasz ""the ropes."" It will be more receptive to ""training"" from a canine teacher. While the Kuvasz is willful, it is also sensitive to scolding and criticism. It's important not to use harsh obedience training methods with this breed. Despite its independent nature, the breed seems ""hard-wired"" to do the right thing in most situations. The same dog that attacks an intruder to protect its owner will watch over the birth of a new lamb to make sure everything goes well. Originally bred to work independently of people, the Kuvasz is an excellent guard dog for people and livestock. It prefers a job to do and will become extremely unhappy if it's expected to be just a family pet.

The breed may adapt to children if raised with them from puppyhood, but it will not appreciate children that are strangers. This breed is best suited for childless homes.

It is believed that the Kuvasz originally came to Hungary with nomadic Turkish shepherds in the 12th century. Its name is derived from the Turkish word "kavas," meaning "armed guard."