Breaking the Habit: How to Stop Your Dog from Chewing 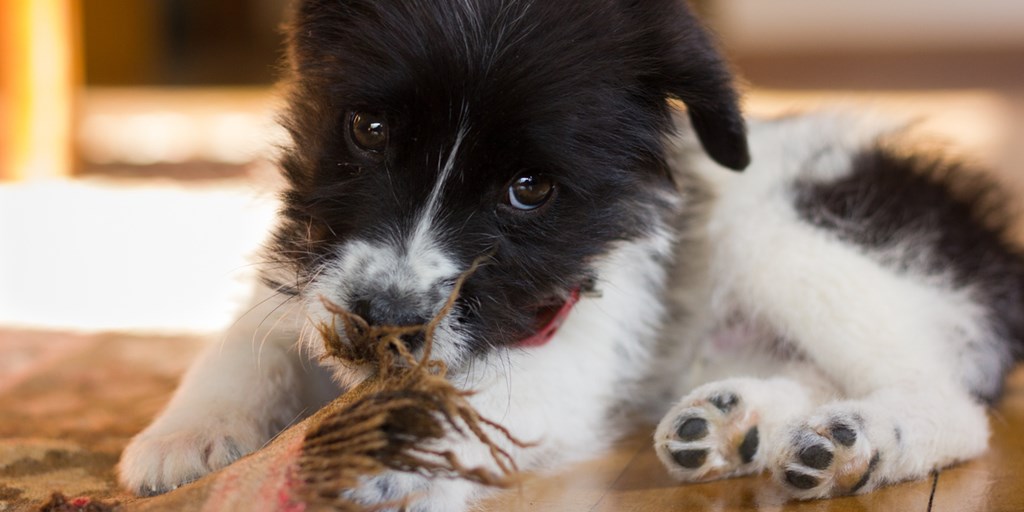 Chewing is a natural instinct for many dogs. More than not, habitual chewing happens during the puppy phase, although adult dogs can develop the practice as well to help blow off steam or act out when they’re anxious. No matter the reason, chewing itself is not a problem – as long as your dog is chewing a toy and not something off limits.

Whether your dog chews on shoes, socks, or furniture, it’s important to catch this bad behavior early and teach your furry best friend that it’s not okay to gnaw on items that aren’t treats or toys. Fortunately, Professional Animal Trainer and TV Show Host Joel Silverman has a few pointers on how you can stop your dog from chewing what he shouldn’t.

What You Can Do to Keep Your Dog from Chewing Clothes, Furniture, and More

When it comes to chewing, your main goal is the same as any other bad behavior: to stop the habit. This means doing what you can to prevent your buddy from completing these actions, as any ongoing acts of chewing will only bolster future efforts.

“Letting your dog play out these actions is reinforcing,” Silverman says. “Not only is it something that you don’t want him to do, the fact that he’s completing his action makes him feel good and reinforces the behavior for him.”

Of course, there’s more to stopping your dog from chewing than just telling him “no.” Whether you have to leave your dog at home while you work or you’re busy with your kids in addition to your furry family members, it’s impossible to watch your dog 24/7. That’s why it’s important to take the following steps to help him understand that chewing your family’s things is not allowed.

Act appropriately when your dog is caught red-pawed

A lot of bad behaviors don’t happen overnight. The longer your dog gets used to chewing off-limit items, the more he’ll think that it’s okay for him to do so. As such, you’ll want to make sure to reinforce that it’s not allowed as soon as you catch him in the act.

The first step you need to take is to verbally tell him that chewing is not okay. A strong “no” or some other command he recognizes will help reinforce that chewing certain items is bad. You can then take the item away from your dog – or move him away if he’s gnawing on a corner of the couch or some other larger item – but it’s important that you don’t pull him away by the collar, shake him, or hit your dog as a means to stop him from chewing.

“It’s the worst thing you can do to an animal for so many reasons,” Silverman says. “Not only does it hurt the animal, it also destroys your relationship. People think that even grabbing the collar or shaking them isn’t hitting the animal but doing so sets up your dog to react to other people negatively if they do the same thing.”

Once you take away the item your dog is chewing, it’s equally important to redirect him to something else. Chewing itself is not a bad action, so it’s good to give your dog a toy or snack that he can gnaw on to help him get the impulse to chew out of his system. Redirecting his urge to chew will help teach him what he should chew on and reinforce which items are off limits.

Prevent your dog’s ability to chew in the first place

While it’s important to take the right steps to reinforce good behaviors, when you catch your dog chewing something he shouldn’t, it’s even better to prevent the behavior before it even happens. This means practicing taking measures to make sure your dog isn’t in a position where he can turn your socks, shoes, or other items into chew toys.

A big part of this process is simply eliminating makeshift chew toys from the areas where he can find them. If your dog loves to chew on socks, don’t accidentally leave a stray pair on the floor or put them in a hamper that he can access. If he can find them, he will chew them until you break that habit.

While you want to limit your dog’s access to items like socks and other chewable items, you should make sure he always has access to his toys. Sometimes dogs will go after items like shoes or socks because they don’t have any toys when they need them. It’s also important that your dog knows the difference between his toys and your things.

“Make sure there’s a major difference between the toys and your socks,” Silverman says. “If his toys look a lot like your socks, that’s not a good thing.”

For example, if your dog really loves chewing on soft clothes, a soft cloth toy won’t help him understand the difference between the two as much as if you give him something like a rubber chew toy or something distinctly different. In turn, soft, fuzzy toys are great if your dog’s taken to gnawing on something hard.

Of course, there are times where you can’t simply remove an item from a room, such as when your dog has the urge to chew the corner of your couch. In this case, you won’t want to leave your dog alone in that area until you’ve broken his chewing habit. This will give you the ability to stop any rogue gnawing before it happens.

“Remember, you want to be there to correct the dog before he starts chewing, not while the dog is chewing,” Silverman says. “If he starts approaching the area he wants to chew, wait until he’s six inches away and tell him ‘no.’ This way you interrupt the behavior and don’t let the dog complete the action.”

Take precautions for when your dog is by himself

Whether you need to go to work or run a quick errand, there will be a point where you may have to leave your dog alone. This can call for measures beyond just removing off-limits items and having toys available.

Crate training is a good way to help prevent unwanted chewing while you’re away. By training your dog to stay in a crate, you can make sure he doesn’t get into any issues while you’re not there. However, make sure that he has a toy or two available in the crate with him so that he can responsibly chomp on something when he needs to. If crates aren’t an option, a dog gate or some other similar solution can help close off problem areas to your dog until you’re able to condition your dog to chewing the right objects.

Preventing Dogs and Puppies from Chewing

With some vigilance and preparation, you can stop your dog from chewing things he shouldn’t. Fortunately, that doesn’t mean that you’ll need to be on contraband watch for years to come with proper training.

“It’s not like we’re going to pull socks away from dogs for 15 years,” Silverman says. “It’s just a matter of conditioning your dog. When your dog is no longer able to complete the action of chewing, that’s when the behavior eventually goes away because he’s not in that position to complete the action and he has access to toys.”

The time it takes to teach your dog not to chew on certain items can vary on a couple factors. The earlier you catch the problem, the easier it will be to condition your dog to chew on toys instead of your things. Certain dog breeds are also more prone to chewing. Dogs with higher prey drives, such as Jack Russell Terriers, are more likely to have the urge to chew than other breeds, which can call for additional attention. No matter who your furry friend is, a little love and consistency can help condition his chewing habits so that everyone is happy.

Want to learn more about what you can do to train your dog and make sure he stays happy and healthy? Join our Best Friends Club today to receive our exclusive email newsletter with training tips, informative articles, and members-only discounts on Bil-Jac dog food, treats, and other products for your best friend.